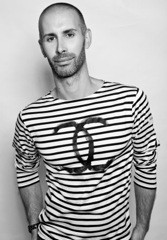 In 1990 Mauro started hair while living and working in a salon in London, Soho.

Soon he started working for spanish and international magazines, such as Elle, Marie Claire, Vogue, Vanidad, Telva, Woma, Glamour Italia, Glamour Spain, GQ and many more. In addition to that he was working on campaigns for Timotei, Diesel, Ponds, Garnier, BMW, Puma, Versace Jeans.

In 2000 he joined Chanel and became part pf the spanish team. Within a short period of time he was honored to become the advisor – responsible for the image of the brand in tv, internet, in interviews and magazines. Mauro has been collaborating also with the brand John Frieda for three years for the spanish market.

Throughout all the years he has been working with many celebrities, such as Britney Spears, Donatella Versace, Monica Bellucci, Carmen Electra, Paz Vega, Elsa Pataky and Bar Raffaeli.

Mauro is based in Madrid and joined Close Up Agency in 2009.